Reflections on Thoughts, Words, and Deeds

Abandoned. The Loss of Ourselves 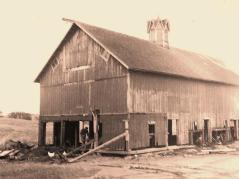 Empty barns and farmhouses dotted the Minnesota countryside around our farm in the 1940s. Gray, unpainted houses with square, boxy lines and broken windows, stood vacant, like homely brides jilted by owners who went under, sold out, or moved to town. Deserted, vacated, and left behind—abandoned.

My college sweetheart and I married but disconnected gradually over a dozen years. We separated at Christmas when everyone else was tightly coupled to spouses and children. A sad time when I felt jilted, forsaken and rejected—abandoned.

The Casa Loma, a rural dancehall and bar near our farm, closed in the 1950s. A 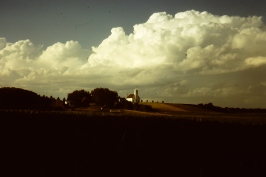 man bought it and opened a junk yard. Soon he filled the lot with the worn-out carcasses of farm pick-ups, mangled sedans, dead combines and invalided tractors. He ran a hospice for derelict hulks of iron and steel, unwanted, disowned, thrown-away—abandoned.

Years ago, on a hiking trip across Wyoming’s high, open range, I came upon a cluster of rotting log cabins. Once a gold camp, its population consisted of half-wild range cattle that loitered in the saloon under its sagging roofline. The cadavers of autos made in the 1920s lay on their sides long ago amputated of useful parts. Rotted wooden ladders descended into pitch dark shafts bereft of ore. A ghost town, vacated, empty, deserted—abandoned. 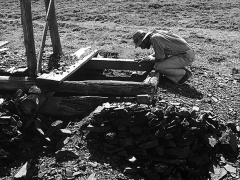 In my files resides a book manuscript I can’t sell. Well-written, articulate, and informative that no editor wants to publish it in these times. I can’t bear to throw it away but I can do nothing with it. Thus it is buried in file case, unread, useless, unwanted—abandoned.

One night while canoeing Montana’s upper Missouri River, my father and I camped near homesteads built in the early 1900s. In the morning, we wandered among the small cabins of cedar logs and sod roofs, rusting hay mowers and breaking plows. Homesteaders tried to sink roots in the early 1900s, then ripped them up and walked away during the dusty 1920s. As one-time farmers, we understood. Disconnected and isolated from markets in this beautifully desolate place, they chucked farming and ditched their dreams. Their hard work thrown away, discarded, left behind—abandoned.

A good friend lost his wife to another woman. For a long time, he lost his good spirits and went about as a vacant soul, a desolate and disconsolate temple of the spirit. Morose and distraught, he told me about feeling cut off, jilted, unwanted—abandoned.

For eight years I worked to earn a PhD and become a college professor. After the courses, the lectures, the seminars and exams, I knew this wasn’t the life for me. I severed connections with the academic world and gave up serious scholarship for a public life. A false dream rejected, set aside, left behind—abandoned.

Writing, careers, spouses, cars, homesteads, houses, mines—we abandon them, leave them behind, and cast off each one like a husk to assume something else. Those who abandon do so for a lack of hope, or out of hope for something better. And those who are abandoned are forlorn, diminished, forsaken. Whatever and whomever we leave behind, reject, throw-away, cut off, separate, forsake, ditch, dump or discard—all are a part of who we are and were and what we dreamed. Abandoned houses and cars, junk yards and careers, give mute testimony to fate, folly, and the human inability to foresee the future. Those whom we have abandoned write our moral epitaphs with their pain and fear. Abandoning something or someone may open new possibilities for us but there is always a moral price we must pay.